Traditional Legal Model – Any sin incurs a debt and an entry in the record books of heaven for which justice demands a payment or penalty. The penalty and record of the sin can be erased or forgiven only by the payment of blood – the death of either the offender or a substitute. God grants forgiveness on the basis of the payment by the death of His Son if and when the sinner requests it. Forgiveness is conditional and mostly a bookkeeping or legal matter.

Biblical Healing Model – Sin damages relationships, always hurts the sinner in some way and usually hurts others as well. Any “penalties” are simply natural consequences resulting from the sin. Sinners can be described as sin-sick and in need of healing. God always forgives every sin; He does not hold our sins against us. What is needed on the part of the sinner is a realization of that freely-offered forgiveness and acceptance of it. Forgiveness is relational and (this is important to understand) a two-part transaction.

It helps our understanding to address the following questions.

Let’s briefly look at each.

No, because there is no record for the purpose of settling accounts. While the all-knowing God does not forget anything in terms of not being able to recall events, He does not remember our sins with an attitude of “you’ll pay for that.” Read how love thinketh no evil (keeps no record of wrongs).

No, because our loving God never has negative feelings for us even when we sin. His relationship to us is much more that of a loving parent. The idea that the justice of an offended God must be satisfied comes from a misunderstanding of the meaning of God’s justice. This is well-explained by this illustration.

No, the omniscient God never forgets anything. See a discussion of forgetting and remembering wrongs. The fact that sin happened, all of the resulting negative effects and that it was cured by the self-sacrificing remedy God provided will be insurance that it will not occur again. (Nahum 1:9) 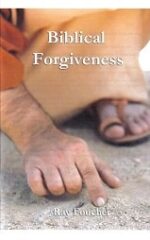 Forgiveness is a Two-part Process

Before looking at the last two questions, let’s remind ourselves that the forgiving process has two parts – it is both given (by the forgiver) and received (by the forgivee). When you think about it and your own experiences with forgiving and being forgiven, this is logical. My booklet Biblical Forgiveness: Are There Two Types?  explains this in detail.

Yes, it should and that is part of the healing process that is so important in the Biblical Healing Model of the Gospel.  Those feelings are only meant to send us to God who can heal us from the effects of sin. (Like physical pain moves us to seek a pain reliever.)

Yes, it should as we realize that God’s laws are design or natural laws rather than imposed or arbitrary laws and are meant only for our good and our protection.

While sin is commonly thought of an action that violates rules given by God, sin, at its core, is a lack of trust in God which stems from not correctly understanding His character. More about this in the glossary’s definition of sin.

The Seven Myths of Forgiveness are well described by Dr. Timothy Jennings. These are important to understand in connection with forgiveness. The seven myths are that forgiveness:

The ever-merciful God always freely grants unconditional forgiveness; it is only up to us to accept it. Unfortunately, the enemy has introduced a legal mindset that requires a penalty for every sin. God’s laws are there to protect and when we break those laws God’s effort is to heal the damage done.

« Judge Not, that Ye be Not Judged » Him Shall God Destroy