The Heart of the Matter and Jesus’ Resurrection

Here is an excerpt from Ray’s book In the Heart of the Earth: The Secret Code That Reveals What Is In the Heart of God. This a section from the final chapter that, I believe, points to the true significance of the sign that Jesus said He would give to those who (in Matt 12:38) were requesting a sign from Him.

The Heart of the Matter 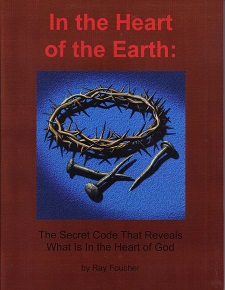 Now please follow the reasoning as we see how it connects with the sign of the prophet Jonah, and the three days and three nights that Jesus spent in the heart of the earth. “… God is love …” (1 John 4:8). God created beings upon whom He could bestow that love and who could freely return love to Him. To truly be free to love God they had to also be free to choose not to love Him. They had to be free to choose another way. Obviously, they are not free to do this if they are either incapable (as in pre-programmed robots) or have no opportunity.God went so far as to give Adam and Eve a choice regarding the tree of knowledge of good and evil with all of its potential for sin and destruction. This is good evidence for how far God is willing to go to allow man to have and exercise his free will. As Adam and Eve were, by God’s design, free moral agents, He could not restrict their wills to keep them from transgression and yet leave them free. Once they had sinned they had removed themselves, to a great degree, from His protection and the destroyer began his work.

This reasoning is all about the character of God. The debate between Jesus and His listeners in Matthew 12 had much to do with the issue of God’s character and it was the big issue in Jesus’ life. Throughout His years of ministry on earth, Jesus was constantly attempting to reveal His Father. Consistent with the will and actions of His Father, He never forced the will of anyone under any circumstance:

“Then answered Jesus and said unto them, Verily, verily, I say unto you, Th e Son can do nothing of himself, but what he seeth the Father do: for what things soever he doeth, these also doeth the Son likewise.” (John 5:19)

God gave man a free will and He will never interfere with it. The ultimate illustration of this, the sign to that wicked and adulterous generation and ours, is that the Father allowed His only-begotten Son to be within the control of man (figuratively, “in the heart of the earth,”) for a period of time for man to do with Him as he willed. The Father would not interfere with the will and actions of man even while they tortured and killed His Son.

For more information on the content of this book or to obtain a copy visit my other site.