The law definition people associate with the gospel is very much dependent of their view of the nature of the law.

Traditional Legal Model – God’s laws are the rules He made to govern our behavior which, if transgressed, incur the imposed legal penalty of death (Rom 6:23).

1. God’s laws are the design template for life and are based on love, the defining characteristic of God, (“God is love” – 1 John 4:8) deviations from which, if not corrected, naturally end in death.
2. Specific laws were given as diagnostic tools (“By the law is the knowledge of sin” – Rom 3:20) to show man his condition – whether or not he is in harmony with God’s law/principal of love.

The difference within the Biblical Healing Model between laws as God’s design for life and laws as diagnostic tools is often (but not always) reflected in the use or non-use of the definite article “the” with “law.”

Especially in Paul’s letter to the Romans, where there is much discussion about law, the absence or presence of the definite article “the” with “law” is significant. In Romans, “law” is used about 35 times with the article and about 40 times without.

One needs to check an interlinear version or consult a good commentary to determine whether the definite article is present or not in the original Greek because various Bible versions will add or omit it incorrectly.

When absent, the emphasis is generally on “law” as a principle (as in the first definition above under Biblical Healing Model). To say someone “disregards law” or “is a lawbreaker” says more about the attitude of the person than it does of a particular law broken by that person. The following two verses can easily be seen as speaking of law as a principle. In both cases, the definite article “the,” while appearing in the King James Version, is not present in the original. (I have crossed it out in the verses.)

“Owe no man any thing, but to love one another: for he that loveth another hath fulfilled the law.” (Rom 13:8)

“Love worketh no ill to his neighbour: therefore love is the fulfilling of the law.” (Rom 13:10)

When the article is present, it is speaking more often of law as a code of conduct or of particular laws (as in the second definition above under Biblical Healing Model).

“Therefore it is of faith, that it might be by grace; to the end the promise might be sure to all the seed; not to that only which is of the law, but to that also which is of the faith of Abraham; who is the father of us all,” (Rom 4:16)

In the verse above, “the law” (definite article in original) can readily be understood to be a reference to the written law as it is used to distinguish a people to whom it as given (“that … which is of the law”) as opposed to others who shared the faith of Abraham but were not his descendants (“to all the seed” – all who believe).

“Law (noun) The principles and regulations established in a community by some authority and applicable to its people, whether in the form of legislation or of custom and policies recognized and enforced by judicial decision.” (www.dictionary.com, accessed Dec. 30, 2017)

“1. A rule, particularly an established or permanent rule, prescribed by the supreme power of a state to its subjects, for regulating their actions, particularly their social actions. Laws are imperative or mandatory, commanding what shall be done; prohibitory, restraining from what is to be forborn; or permissive, declaring what may be done without incurring a penalty. The laws which enjoin the duties of piety and morality, are prescribed by God and found in the Scriptures.”

“8. Moral law a law which prescribes to men their religious and social duties, in other words, their duties to God and to each other. The moral law is summarily contained in the decalogue or ten commandments, written by the finger of God on two tables of stone, and delivered to Moses on mount Sinai.”
(http://webstersdictionary1828.com/Dictionary/law, accessed Dec. 30, 2017)

Of course, there are other meanings for law including natural law etc. Specific Divine laws also include:

• Directions regarding the sanctuary and its services
• Laws relating to personal relationships, marriage, slavery etc
• Laws about commerce, health, sanitation and agriculture

God’s law (principle) of other-centered love is not arbitrary. Death is the inherent result/natural consequence of self-centeredness which is a state of separation from God. Therefore, death is not a legal penalty, for the law simply declares reality. If uncorrected, a state of sin – living outside the law – results in final separation from God (Who is the source of life) and results in death. “The wages of sin is death …” (Rom 6:23). More verses saying this.

God’s laws regarding behavior can be understood as diagnostic tools. A hurtful act such as stealing shows a person to be self-centered rather than other-centered. Attempting to keep all the laws regarding behavior (while good) can never save (legalism does not work) because behavior is not the problem. The heart must be changed to be in harmony with the principle of other-centered love. For more on how this change takes place see the series of studies The Cleansing of the Sanctuary.

The Lenses/Paradigms Through Which Law is Understood

It also helps to understand God’s law by diagramming its function: 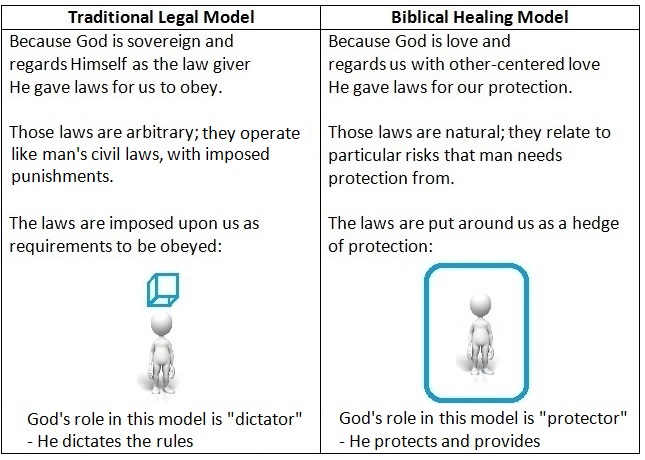 This difference in views of the role of law is further explained at: https://characterofgod.org/gospel-models-law/

Can Divine Laws be Changed?

The law of God as a principle reflects His very nature and is therefore, like Him, unchangeable. God’s laws regarding details of behavior (the diagnostic tools) can and do change as God deems necessary for our situation. They change because He does not. He always operates in accord with His key attribute of other-centered love. One example of law being changed is:

“For the priesthood being changed, there is made of necessity a change also of the law.” (Heb 7:12)

There are many examples of what have been termed divine accommodation.

A more thorough explanation of the role of divine law is given in this video.
A Wall of Protection (56 min) – the real role of God’s law.

Purpose of the Law in the Ark

Here is an important point regarding the law and the character of God. Referring to the reason the unbroken set of ten commandments (rather than the first set that Moses broke – Exodus 32:19) was placed in the ark, Tim Jennings says:

“This distinction is important because some versions of Christianity teach that the lid, which represents Jesus, “covers” the “broken law” that we sinners have violated. If that were indeed the intended lesson, God would have had Moses put the broken tablets into the ark. But He didn’t; instead, He had Moses put the unbroken law into the ark. Why? Because the object lesson doesn’t teach paying penalties for a broken law or the covering over of lawbreaking. No! It teaches the reality of God restoring His living law, the law of love, the law upon which life is built to operate, into the hearts and minds of His people.” (from: https://comeandreason.com/most-holy-place-metaphor/ ) More info on that page.

« The Passions of Elijah Part 1 – Elijah and the Prophets of Baal » Is Salvation a Legal Matter? by Kent