What is the Gospel?

What is the Gospel? The gospel needs to be correctly understood in spite of the almost universal confusion over it. Here is a definition consistent with the character of God.

Traditional Legal Model: The good news of the kingdom of God including that God would send His Son to pay the penalty for sin so that we could be forgiven.

Biblical Healing Model: The good news of a God of love Who is more concerned for our happiness than for His own; Who forgives all sins and acts always in love.

Those brief model descriptions don’t seem that different, yet, when the various terms included in this glossary are understood according to their true meaning, the contrast is apparent. Then the true good news is seen to be much better than the usual understanding.

“And I saw another angel fly in the midst of heaven, having the everlasting gospel to preach unto them that dwell on the earth, and to every nation, and kindred, and tongue, and people,” (Revelation 14:6)

The word “gospel” (Greek “euaggelion”) means good news. Originally it referred to the good news that the Messiah had come and the message He proclaimed. Later, it was applied to the narrative of the life of Christ and, finally, to the written “gospels” of Matthew, Mark, Luke and John.

What is the Gospel? – My Attempt at Defining:

“The gospel is especially good news in light of the bad news that we are spiritually sick and, apart from God, in a hopeless state. The gospel gives the solution by revealing the character of a God of love who does not condemn us and is doing all He can to save us. He proposes to heal our terminal condition through the life and example of His Son motivating us to trust Him to change us with our cooperation into His likeness.

If the gospel is “the everlasting gospel” it must have always existed or at least as long as there was a problem the gospel was designed to fix; that problem being sin. Let’s look at the gospel from different points in salvation history.

The Gospel in Eden

After Adam and Eve sinned and the future looked like there would be only bad news, the good news came in the form of a promise:

“And I will put enmity between thee and the woman, and between thy seed and her seed; it shall bruise thy head, and thou shalt bruise his heel.” (Gen 3:15)

Think of the bad news as that mankind has just come down with a terrible disease – an alienation from God caused by taking poison from the enemy – His lies about the character of God resulting in distrust of their Creator. The good news then is that God will put an enmity or distrust of Satan and his lies back into man thus initiating the healing process.

The Gospel from Moses 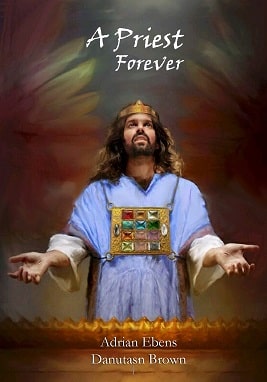 “For unto us was the gospel preached, as well as unto them [the Israelites]: but the word preached did not profit them, not being mixed with faith in them that heard it.” (Heb 4:2)”

The gospel is good news of forgiveness and grace freely available. It would not have been good news for Israel to have preached to them that forgiveness and grace would come 1500 years after they were dead, leaving them with no ability to overcome sin in this life. This would have been merely the promise of the gospel and not the gospel itself. Such preaching would have only been words of mockery to Israel, condemning them to death without any hope of tasting in their lives the grace of Christ. We repeat the point that shadows only exist because the reality existed before them.” (Adrian Ebens, A Priest Forever).

That verse in Hebrews and the statement above point to the presence of the gospel in the time of Israel; it was there and functioning. For the good news to be good news it must offer benefit those who hear it.

Isaiah, who is often referred to as the gospel prophet, wrote of the coming of the Messiah and His message of good news:

“The Spirit of the Lord GOD is upon me; because the LORD hath anointed me to preach good tidings unto the meek; he hath sent me to bind up the brokenhearted, to proclaim liberty to the captives, and the opening of the prison to them that are bound; To proclaim the acceptable year of the LORD, and the day of vengeance of our God; to comfort all that mourn;” (Isa 61:1-2)

Jesus quoted those verses except He left out the “vengeance” part because, by His time, there was great (and popular) misunderstanding of the role of the Messiah:

“The Spirit of the Lord is upon me, because he hath anointed me to preach the gospel to the poor; he hath sent me to heal the brokenhearted, to preach deliverance to the captives, and recovering of sight to the blind, to set at liberty them that are bruised, To preach the acceptable year of the Lord.” (Luke 4:18-19)

The next thing He said was:

By saying that He was announcing Him ministry to them and pointing to the work He would do which was very much good news to the poor, the brokenhearted etc. It was not good news in the understanding of those (especially the leaders in Israel) who were more concerned about their own position and power.

The Gospel in Romans

The gospel is presented by Paul in Romans but without the account of Christ’s life.

“For I am not ashamed of the gospel of Christ: for it is the power of God unto salvation to every one that believeth; to the Jew first, and also to the Greek. For therein is the righteousness of God revealed from faith to faith: as it is written, The just shall live by faith.” (Rom 1:16-17)

“The gospel of Christ” is the power of God unto salvation” or the power to save. To save from what? It must be to save (related to the word “salve”) or heal from our condition in which we are separated from God. God will not save anyone who does not want to be saved, to have their relationship with Him restored. The power of God that saves is the good news of Who He is and what He is like.

The Gospel in Revelation (now and future)

The book of Revelation connects the gospel to judgment in the time of the end:

“And I saw another angel fly in the midst of heaven, having the everlasting gospel to preach unto them that dwell on the earth, and to every nation, and kindred, and tongue, and people, Saying with a loud voice, Fear God, and give glory to him; for the hour of his judgment is come: and worship him that made heaven, and earth, and the sea, and the fountains of waters.” (Rev 14:7)

Those preaching the gospel say:

They do it because:

It is not commonly understood that judgment is primarily about God being judged:

Each person, in a sense, judges God and His principles. Those who reject the gospel judge God to be untrustworthy, effectively judging themselves so that they will not be healed. Notice how the gospel is equated with the word:

“For unto us was the gospel preached, as well as unto them: but the word preached did not profit them, not being mixed with faith in them that heard it.” (Heb 4:2) (see also Acts 8:25 and Eph 1:13)

Rejecting the word (the gospel) prevents it from healing them and they thus also reject eternal life:

“Then Paul and Barnabas waxed bold, and said, It was necessary that the word of God should first have been spoken to you: but seeing ye put it from you, and judge yourselves unworthy of everlasting life, lo, we turn to the Gentiles.” (Acts 13:46)

« Propitiation – definition » The Definition of Repentance