The Definition of Repentance

The definition of repentance. Repentance is something that happens in a person’s mind. It can be shallow or deep; surface or heartfelt. What is Biblical repentance and where does it fit within those ranges?

Traditional Legal Model – Sorrow for sinful deeds done with the expectation or hope of then being free from punishment.

Biblical Healing Model – The sorrow a person has because of a realization of their damaged relationship with God and the sorrow they have caused Him and others. Genuine repentance would include a determination to reform behavior.

“Or despisest thou the riches of his goodness and forbearance and longsuffering; not knowing that the goodness of God leadeth thee to repentance?” (Rom 2:4)

Repentance noun
deep sorrow, compunction, or contrition for a past sin, wrongdoing, or the like. regret for any past action. (dictionary.com)

Webster’s 1828 Dictionary (https://webstersdictionary1828.com/) has 3 definitions so we are going to use that to look at different levels of repentance. 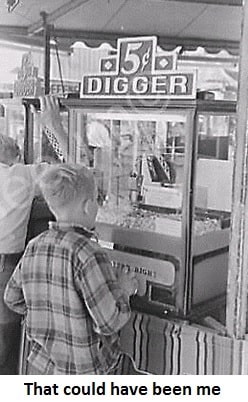 “Sorrow for anything done or said; the pain or grief which a person experiences in consequence of the injury or inconvenience produced by his own conduct.”

This, most-shallow level of repentance may involve little concern for others. It is mainly self-centered. I’ll illustrate with a personal example (from somewhere in the range of 60 years ago.)

As a young boy (but old enough to walk by myself to the nearby visiting circus) I was attracted to the digger machine where for a nickel (5 cents) one could control (supposedly) a small crane to pick up wrapped candies or much better prizes. I went through a handful of nickels and got basically nothing for it. I remember being quite upset about it and sorry for the loss resulting from my behavior. The repentance (if you could call it that) was pretty shallow and did not involve any moral conviction.

That would match Webster’s first definition of repentance – sorrow for my own conduct but not involving anyone else.

“In theology, the pain, regret of affliction which a person feels on account of his past conduct, because it exposes him to punishment. This sorrow proceeding merely from the fear of punishment, is called legal repentance … and it may exist without an amendment of life.”

That level of repentance corresponds to the Traditional Legal Model of the gospel. The repentance is motivated by the fear of punishment and the hope is that there would be a legal exoneration and a freeing from punishment by a very legal God Who makes sure every sin is punished. Such repentance might have been prompted by preachers such as the 18th-century Jonathan Edwards who said in a famous sermon:

“The God that holds you over the pit of Hell, much as one holds a spider, or some loathsome insect, over the fire, abhors you, and is dreadfully provoked; his wrath towards you burns like fire; he looks upon you as worthy of nothing else, but to be cast into the fire; he is of purer eyes than to bear to have you in his sight; you are ten thousand times so abominable in his eyes as the most hateful venomous serpent is in ours.” (Jonathan Edwards, 1741 sermon)

What is the expectation of a repenting person who has that understanding? What changes in the person’s mind with that kind of repentance? Is it simply relief that they are not condemned to a horrible punishment?

I remember, again as a young boy having been raised in the Catholic faith, going regularly to confession and giving a list of sins and being given prayers to pray as penance. There was never a change in behavior or closeness to God as a result. 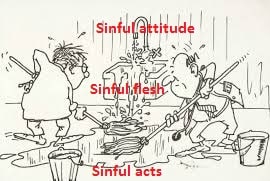 How does that kind of repentance relate to this image?

It was only sorrow for the mess on the floor – the sinful acts and that sorrow was because of actual or potential personal loss. Perhaps it was a deeper repentance than in the first level mentioned earlier because, in some cases, there was some hurt to others.

Does that level of repentance change what’s upstream in the diagram? Barely, as the same sins would continue. Repenting of outward acts – the sins on the floor -does not solve the real problem which is the condition of the heart.

That level of repentance might motivate a person to attempt to minimize future losses, embarrassment etc by avoiding the action but there is no real change in the character.

“Real penitence; sorrow or deep contrition for sin, as an offense and dishonor to God, a violation of his holy law … This is called evangelical repentance, and is accompanied and followed by an amendment of life.”

Deeper repentance involves a spiritual component and a different motivation:

“Or despisest thou the riches of his goodness and forbearance and longsuffering; not knowing that the goodness of God leadeth thee to repentance?” (Rom 2:4)

God was so good that He did what? Most people will think of this:

“For God so loved the world, that he gave his only begotten Son, that whosoever believeth in him should not perish, but have everlasting life.” (John 3:16)

“O generation of vipers, how can ye, being evil, speak good things? for out of the abundance of the heart the mouth speaketh.” (Matt 12:34)

The heart is represented by the overflowing sink in the diagram. If the heart is not changed there will be no real change in the life and, especially under difficult circumstances, the condition of the heart (the sinful flesh) will be revealed.

Webster’s third definition included mention of an “amendment of the life.” While efforts may be made, they can only have so much effect:

“Can the Ethiopian change his skin, or the leopard his spots? then may ye also do good, that are accustomed to do evil.” (Jer 13:23)

That level of repentance still does not have the power to truly change the life.

The 4th Level of Repentance – Cleansing the Sanctuary

We have looked at repentance on three levels corresponding to the three definitions of repentance in Webster’s dictionary:

We are moving upstream towards the source of the problem.

We can go deeper yet and repent of our attitude towards God; repent for believing wrongly about God and for negative feelings towards Him which we may not even be aware of. You might react to this saying: “But that’s not my fault – I had wrong information.” You did and the world and even the majority of Christians still do.

However many never get the right information because they:

In level 3, we identified a desire to change and the inability to change ourselves. Is there any way to get God to just change our hearts for us? There is such a promise in scripture:

“A new heart also will I give you, and a new spirit will I put within you: and I will take away the stony heart out of your flesh, and I will give you an heart of flesh.” (Eze 36:26)

However, He will not do that without our permission and cooperation. He will not just change our hearts, our thinking because He wants to. We know that God wants all to be saved; that none should perish (2 Peter 3:9) but many reject His efforts to change them. He has provided the means of change which involves our free-will cooperation:

“But we all, with open face beholding as in a glass the glory of the Lord, are changed into the same image from glory to glory, even as by the Spirit of the Lord.” (2 Cor 3:18)

We need to behold; to focus on His character (glory); to study especially the life of Christ Who came to show us the Father. Do that and the change will happen.

Put into your mind the truth about what God is like and your mind and heart will be changed (you become like that upon which you focus). Your attitude towards God will change and that will produce a change in the inward man and in the outward actions.

God is not concerned so much about acts of sin. He wants to go to the source of the problem and fix what is broken. He is not going to punish us for our sins or our faults. He is trying to save us from the pain we are bringing on ourselves.

“And this is life eternal, that they might know thee the only true God, and Jesus Christ, whom thou hast sent.” (John 17:3)

« What is the Gospel? » The Chastening of the Lord