Punishment. The Definition in the Bible is not as We Commonly Understand

Traditional Legal Model – Pain or some other penalty (including temporal and eternal death) actively imposed by God as just retribution for sins committed.

Biblical Healing Model – God honoring man’s free will by allowing the natural consequences of a chosen action to take place.

1. the act of punishing.

1. to subject to pain, loss, confinement, death, etc., as a penalty for some offense, transgression, or fault
(www.dictionary.com/browse/punishment?s=t)

Punishment  (noun)  Any pain or suffering inflicted on a person for a crime or offense, by the authority to which the offender is subject, either by the constitution of God or of civil society.

Divine punishments are doubtless designed to secure obedience to divine laws, and uphold the moral order of created intelligent beings.

The rewards and punishments of another life, which the almighty has established as the enforcements of his law, are of weight enough to determine the choice against whatever pleasure or pain this life can show.
(http://webstersdictionary1828.com/Dictionary/punishment)

There has long been the understanding that “If you do the crime, you do the time” – you pay the penalty. The idea is that if you sin against someone you cause them pain or loss and therefore you should also suffer pain or loss. But is that God’s way? Does He inflict punishment to exact payment?

Law and order can be kept by force or its threat or it can be kept by inducements to love or loyalty of the heart. It is one or the other – the carrot or the stick. God has chosen the carrot, (the inducement of love) because He wants a relationship based on love.

God ever offers His promises to us but, unlike the image, we are not prevented from reaching it.

If “His mercy endureth for ever” (1 Chron 16:34) He cannot be punishing because to start punishing would be to stop being merciful. But that does not mean sin is not punished. Sin always has one or more natural, negative consequences which could be called punishment. That is the whole reason a particular action is sin. God labels as sins actions that would hurt us or others and tells us not to do them because He doesn’t want to see His children suffer.

The above understanding does not agree with the dictionary definitions provided. We need to examine some original words to determine the real meaning. Please read the study on the meaning of punishment in Hebrew. For an examination of punishment in the New Testament and more on Biblical punishment see Matt 25:46 “go away into everlasting punishment.“

Some might argue that God punishes us for our good. We need to distinguish between discipline (also called chastening) and punishment and their purposes.

“For they verily for a few days chastened us after their own pleasure; but he for our profit, that we might be partakers of his holiness.” (Heb 12:10)

Biblical discipline or chastening is “for our good” (“profit,” KJV). This is as opposed to punishment for the purpose of the satisfaction of the one punishing to have revenge or meet the requirements of an imposed penalty.

“For they disciplined us for a short time as seemed best to them, but He disciplines us for our good, so that we may share His holiness.” (Heb 12:10, NASB)

God punishes, yes, but how does He do it?

“And when he was come near, he beheld the city, and wept over it, Saying, If thou hadst known, even thou, at least in this thy day, the things which belong unto thy peace! but now they are hid from thine eyes. For the days shall come upon thee, that thine enemies shall cast a trench about thee, and compass thee round, and keep thee in on every side, And shall lay thee even with the ground, and thy children within thee; and they shall not leave in thee one stone upon another; because thou knewest not the time of thy visitation.” (Luke 19:41-44)

The visitation referred to in Luke 19 was a reference to the ministry of Christ Who came to demonstrate the love of God to His people:

“The Spirit of the Lord is upon me, because he hath anointed me to preach the gospel to the poor; he hath sent me to heal the brokenhearted, to preach deliverance to the captives, and recovering of sight to the blind, to set at liberty them that are bruised,” (Luke 4:18)

However, He did not meet the expectations about the Messiah and was rejected to the point they declared Him worthy of death:

“But they (the Jews) cried out, Away with him, away with him, crucify him. Pilate saith unto them, Shall I crucify your King? The chief priests answered, We have no king but Caesar.” (John 19:15)

That rejection resulted in God honoring their choice, and removing His presence with the result:

Their house was desolate in the sense that it no longer housed God’s presence. This is illustrated by the term “Ichabod” referring to when the Ark of the Covenant, the symbol of God’s presence, was captured and removed from Israel.

“And she named the child Ichabod, saying, The glory is departed from Israel: because the ark of God was taken …” (1 Sam 4:21)

The result of the removal of God’s protection from Israel in honoring their choice was that Jerusalem was destroyed – not by God but by a Roman army in 70 AD. This pattern is often repeated in scripture.

“For thus hath the LORD of hosts said, Hew ye down trees, and cast a mount against Jerusalem: this is the city to be visited; she is wholly oppression in the midst of her. 7 As a fountain casteth out her waters, so she casteth out her wickedness: violence and spoil is heard in her; before me continually is grief and wounds. 8 Be thou instructed, O Jerusalem, lest my soul depart from thee; lest I make thee desolate, a land not inhabited.” (Jer 6:6-8)

The result of God removing His protection from them was that the king of Babylon came and conquered them.

“And now have I given all these lands into the hand of Nebuchadnezzar the king of Babylon, my servant; and the beasts of the field have I given him also to serve him. And all nations shall serve him, and his son, and his son’s son, until the very time of his land come: and then many nations and great kings shall serve themselves of him. And it shall come to pass, that the nation and kingdom which will not serve the same Nebuchadnezzar the king of Babylon, and that will not put their neck under the yoke of the king of Babylon, that nation will I punish, saith the LORD, with the sword, and with the famine, and with the pestilence, until I have consumed them by his hand.” (Jer 27:6-8)

So the punishment was the result of them refusing God’s protective presence which meant they were vulnerable to their enemies.

This follows what I call the S-W-A-T formula in which:

See more details and over 70 examples of the Sin-Wrath-Accommodation-Trouble formula. It should be clear from all those examples that when God “allows, leaves, give into the hand of etc” it is in response to an action of man in turning from God, following other Gods or some sin indicating that he has done either of those.

In this passage, God says that His giving of kings into the hands of their enemies is to be a sign or example to the Jews dwelling in Egypt (verse 1):

“And this shall be a sign unto you, saith the LORD, that I will punish you in this place, that ye may know that my words shall surely stand against you for evil: 30  Thus saith the LORD; Behold, I will give Pharaohhophra king of Egypt into the hand of his enemies, and into the hand of them that seek his life; as I gave Zedekiah king of Judah into the hand of Nebuchadrezzar king of Babylon, his enemy, and that sought his life.” (Jer 44:29-30)

God “punishes” by giving into the hand of the enemy (often so used in Jeremiah). We call it punishing because it is a bad outcome. But from God’s perspective it is Him honoring our free will, letting go, withdrawing His protection and whatever result happens happens. When God is not active in His role of protector the result is never good.

“Hast thou marked the old way which wicked men have trodden? Which were cut down out of time, whose foundation was overflown with a flood: Which said unto God, Depart from us: and what can the Almighty do for them?” (Job 22:15-17)

That verse is a reference to the flood where again, following the same pattern, God removed His protection in this case in response to a very direct rejection. The question is: “did God cause or permit the flood?”

“I the LORD search the heart, I try the reins, even to give every man according to his ways, and according to the fruit of his doings.” (Jer 17:10) 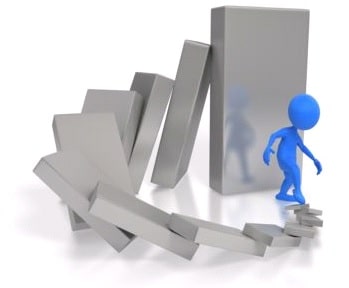 We usually think of this as giving punishment; payment for his evil ways. But it could be to give or allow consequences that are naturally connected to the action whether good or bad. It could also be to give the assistance needed to help him overcome his ways.

So, if God doesn’t actively inflict punishment (or other types of pain and suffering) on the wicked, what does He do to them? What does God do to those who are infected with sin and refuse to allow God to heal them? What would you as a parent do to your adult child dying of leukemia who refused to accept a bone- marrow transplant? Wouldn’t you simply respect their freedom of choice? In doing that you would not be punishing or inflicting harm on them but they could still suffer and die and that result would be because of their refusal to be healed. This is exactly what the Bible teaches.  (Adapted from Tim Jennings – The Question of Punishment)

“And if a soul sin, and commit any of these things which are forbidden to be done by the commandments of the LORD; though he wist it not, yet is he guilty, and shall bear his iniquity.” (Lev 5:17)

Some versions have the person bearing punishment, perhaps thinking it is coming directly from God:

“If someone sins and violates any of the LORD’s commandments even though he was unaware, he is still guilty and shall bear his punishment.” (Lev 5:17, Berean Study Bible)

Other versions recognize that what the sinner is bearing is the consequences, the natural result of their chosen course of action:

“If someone sins and without knowing it violates any of the LORD’s commands concerning anything prohibited, he bears the consequences of his guilt.” (Lev 5:17, Holman Christian Standard Bible)

That is more in accord with the law of sowing and reaping.