“And these shall go away into everlasting punishment:
but the righteous into life eternal.” (Matthew 25:46)

Note: this page is a supplement to the Character of God and the Gospel Glossary definition for “punishment” which explains the meaning of that concept. Here we are looking at the two words in the New Testament used in reference to God punishing. Also, by giving the Biblical meaning of this verse, God’s character of love is defended – He does not and would not torture someone forever even for a lifetime of sin. So, how should Matthew 25:46 be understood in light of the character of God?

A Shift in Meaning

The understanding of the word translated as “punishment” in Matthew 25:46 is interesting and there are hints that it may have changed over time. We will look at three sources:

Here is one commentary on the original word which is “kolasis” (Strong’s G2851):

The renowned Greek scholar William Barclay agrees: ‘The Greek word for punishment is ‘kolasis,’ which was not originally an ethical word at all. It originally meant the pruning of trees to make them grow better. I think it is true to say that in all Greek secular literature ‘kolasis’ is never used of anything but ‘remedial punishment.'” (Richard Murray, Facebook comment)

That is interesting because it is hard to see how being punished for ever and ever could be “in the interest of the sufferer” or how it could be “remedial punishment.” However, note that Barclay is referring to what the word “originally meant.” Also, Aristotle lived from approximately 445 – 385 BC so is it possible that the meaning of the word “kolasis” has changed over time?

The On-line Bible (as an example of much of modern understanding) gives this for these two words:

Kolasis: “κόλασις in classical Greek meant usually punishment which aimed at the reformation of the offender. But sometimes in later Greek, and always in the N.T., the idea of reformation seems to disappear, so that there remains simply the idea of punishment, but viewed in relation to the punished.”

Timoria: “τιμωρία in classical and N.T. usage denotes especially the vindictive character of punishment, it is the punishment in relation to the punisher.”

So the On-Line Bible indicates a shift in meaning of “kolasis” from classical to later Greek. It suggests the more recent understanding of Matt 25:46 being a reference to punishment. But everlasting punishment precludes any reformation. If a person is being punished forever there is no opportunity for reformation. Would a merciful God really do that?

Let’s explore how the Bible itself uses “kolasis” in more detail.

“And these shall go away into everlasting punishment (G2851 kolasis): but the righteous into life eternal.” (Matt 25:46)

First, let’s consider the duration of that punishment which will help understand its nature. Everlasting’ is from the Greek word “aionios” (G166) which:

“… means literally, ‘lasting for an age,’ in the sense of being continuous and not subject to capricious change.” (SDA BC vol. 5; p512)

Roman emperors were often referred to as “aionios” indicating that they held office for life. The duration of time being referred to must be determined by what is being described. In the case of the Roman emperors the time extended only until their death. The everlasting (“aionios”) life of the saved in John 3:16 will not end but is contrasted with the lost who will perish – not have everlasting life.

“For God so loved the world, that he gave his only begotten Son, that whosoever believeth in him should not perish, but have everlasting life.” (John 3:16)

This is consistent with what will happen to “them that know not God” (2 Thess 1:8). They:

“… shall be punished with everlasting destruction from the presence of the Lord, and from the glory of his power;” (2 Thess 1:9)

In that verse, it is not the act of destruction that is everlasting but the results of that destruction. (If you are forever in the act of destroying something is it ever destroyed?) There are examples in scripture showing that does not happen, such as:

“Even as Sodom and Gomorrha, and the cities about them in like manner, giving themselves over to fornication, and going after strange flesh, are set forth for an example, suffering the vengeance of eternal (aionios) fire.” (Jude 7)

Those cities are not still burning today and they are an example to demonstrate the results of eternal fire. Even logic and our understanding of the process of combustion tell us that once the fuel is used up the fire goes out.

So, no, God does not punish people in hell forever (or ever). The final “punishment” of the wicked is also mentioned in this verse:

“And whosoever was not found written in the book of life was cast into the lake of fire.” (Rev 20:15)

For a detailed explanation of that verse showing that God is not actively punishing see my booklet The Lake of Fire and the Second Death.

The explanation in that booklet connects well with the one other use of “kolasis” which is:

“There is no fear in love; but perfect love casteth out fear: because fear hath torment (kolasis). He that feareth is not made perfect in love.” (1 John 4:18)

You will see that the everlasting punishment of Matt 25:46 is the continual torment, the uninterrupted affliction of the conscience in that final judgment scene as described in the e-book linked to above. So the nature of the “kolasis” punishment is not some affliction coming directly from God. Rather, it is the torment of a guilty conscience and the resulting mental anguish. The conscience is designed by God to prompt us toward repentance.

The one use of the other word translated as “punishment” in the New Testament (“timoria,” G5098) is:

“Of how much sorer punishment (timoria, G5098), suppose ye, shall he be thought worthy, who hath trodden under foot the Son of God, and hath counted the blood of the covenant, wherewith he was sanctified, an unholy thing, and hath done despite unto the Spirit of grace?” (Heb 10:29)

The definitions for that word indicate vindictive punishment. But is God vindictive? That does not sound like a God of love and forgiveness. The key here is to recognize that the one being punished is “thought worthy” to receive sorer or more extreme punishment. “Thought worthy” by whom? We, with our “you do the crime, you do the time” thinking, deem a greater crime to be worthy of greater imposed punishment.

This verse, I believe speaks of a person conceiving chaff (“combustible matter – in the spiritual sense):

That chaff will be “ignited” by the affliction of conscience as in:

“Therefore if thine enemy hunger, feed him; if he thirst, give him drink: for in so doing thou shalt heap coals of fire on his head.” (Rom 12:20)

This corresponds to the final fate of Satan:

“Thou hast defiled thy sanctuaries by the multitude of thine iniquities, by the iniquity of thy traffick; therefore will I bring forth a fire from the midst of thee, it shall devour thee, and I will bring thee to ashes upon the earth in the sight of all them that behold thee. All they that know thee among the people shall be astonished at thee: thou shalt be a terror, and never shalt thou be any more.” (Eze 28:18-19)

In committing iniquities, Satan conceived chaff which, in the end, will be “ignited” by his own conscience and will devour and destroy him. Here is a similar verse:

“Therefore as the fire devoureth the stubble (H7179), and the flame consumeth the chaff (H2842), so their (those in verses 18-23 to whom woes are spoken) root shall be as rottenness, and their blossom shall go up as dust: because they have cast away the law of the LORD of hosts, and despised the word of the Holy One of Israel.” (Isa 5:24)

The “sorer” or worse punishment of Heb 10:29 is not because God is punishing more severely but because one who has “trodden under foot the Son of God” (or “despised the word of the Holy One of Israel” as in the verse above)  will feel greater affliction of conscience than one who had less opportunity to know and reject truth.

God’s part, as in “will I bring forth a fire from the midst of thee,” is simply to bring forth the truth of His character and all that He has done to bless even those that hate Him. His character of love is displayed, as in the life of Christ who came to reveal the Father, in the hope that sinners will be attracted to Him and see and accept Him as He really is.

This is very similar to Jesus’ saying:

The Prince of Peace came with the purpose of bringing peace but the inevitable result when many reject Him and His message is that there will be division. 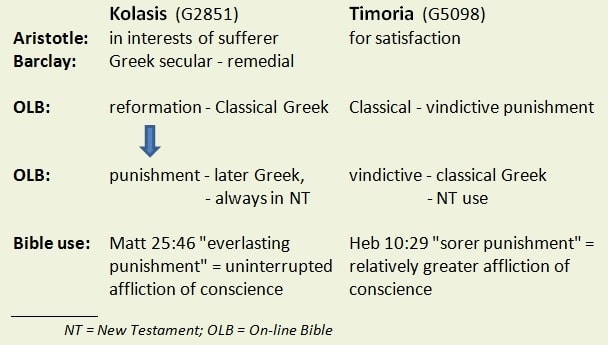 There was a shift between the older classical Greek and the translation of the New Testament no doubt due to the translators understanding of how and why punishment happens.

This is a good example of how a shift in understanding the meaning of words can change our understanding of scripture and especially of the character of God. Matthew 25:46, when understood using correct Biblical meanings of words, also shows that God does not send anyone into punishment and certainly not into a form of punishment that never ends. Really, sin and sinners will self-destruct and that is what our loving God is doing all He can to prevent.

Return to the Character of God Home Page

« Sinner – definition » Punishment. The Definition in the Bible is not as We Commonly Understand