Here is an illustration that is so well thought out and so well illustrates the situation of God dealing with His people choosing the path of warfare that I have included it as it appears in the original publication.

“Picture a smallish town located in an area where wild animals, such as bear, deer, mountain sheep, and various big cats abounded. As is to be expected, the majority of men in the town were keen hunters never missing the opportunity to take their guns out and to track down the game.

But one man was different. He had the love of God in his heart and to kill the beautiful dwellers in the forests and mountains was contrary to his nature. So he was never seen in company with the men trailing off to seek their adventures in the blood of others. For their part, they were troubled by this odd man out and never lost an occasion to persuade him, if possible, to join them. At one time, they even bought him a splendid hunting rifle for his birthday. With Christian graciousness, he gently declined the gift. This was naturally resented, causing those men to increase the pressure on him, but despite this, year after year, there was no change in him. The only equipment with which he would hunt was a good camera.

This man had a fine son whom he was most anxious to protect from the influence of the hunters around. He worked untiringly to instil into him the same love of the wildlife which he possessed, and was gratified to see that he was having good success in this direction. Thus the father was working to have the boy do things his way as distinct from the hunters’ way.

The father did not take away the boy’s freedom of choice. When he eventually reached later youth, he became answerable for himself and was no longer under the direct control and discipline of his father. He received an invitation to spend some weeks away from home and, eager to see new country, accepted the kindly offer. This was a clever plot by the huntsmen, who sent their sons along to invite the boy, once he was away from the father’s direct influence, to go hunting with them. They urged him to try it just once to see how he liked it. Feeling that no harm would be done by an on-the-spot personal appraisal of the hunting business, he went along.

His first reaction was unfavourable but, something about the challenge, thrill, and excitement, drew him back and soon he was an enthusiastic devotee. He went to the sports store, selected a beautifully engineered weapon, and in due time returned with it to his dismayed father. He had exercised his choice and now the father was confronted with a situation which required a response. How would he now relate himself to this turn of events? Clearly the young man had instituted in his life a course contrary to the ways of his father and of God.

For the father, as for God, the choice lay between several alternatives.

The first option was to disown the son, forbidding his entrance to the home and requiring he go his own separate way. The justification for this would have been the certainty that the principles of father and son could never harmonize.

Another course would have called for the use of force to coerce the lad’s surrender to his father’s wishes and ways. This was not the answer for two reasons. Firstly the youth had achieved the age of independence, so it would have been impossible for the father to achieve the desired result anyway. But, secondly, it was not in this father’s nature any more than it is in the character of God, to use force. To them, the only acceptable service is that which springs from an educated heart of love.

A third alternative was to quietly ignore the change, pretend that the rifle had never been brought into the home, and act as if all were well when, in fact, it was not. Again, this was no way out, for sin cannot be ignored. Neither love nor justice will permit it. Iniquity demands attention. A response to it will always be forthcoming whether it be the saving outreach of love or the vindictive reaction of destructive hate.

Having considered and rejected each of these possibilities, what would have been left for this godly man to do? What would God do in the same situation?

Firstly, the older man recognized that his son had placed himself, other people, domestic livestock, and wild animals, in a position of great danger. Being an inexperienced and untrained rifleman, he did not understand the necessity of looking beyond the target to ensure that there were no buildings, people, or farm animals in the line of fire. He needed to understand how to carry the weapon so that in climbing through fences, for instance, he did not, as so many have done, shoot himself or his friends. He must be made aware of the awful potential of the ricochet, when a bullet, glancing from rock or tree, will embed itself in a target far to the right or left of the original sighting. He must come close enough to the game to eliminate the possibility of only wounding the animal which would then drag itself away to suffer a lingering death. These and others things he could be taught in order to save himself and others from the worst effects of what he had chosen.

While the father could no longer save the youth from taking the gun, he could, if permitted, provide the instruction needed to save him from these serious consequences. Even the wild animals would benefit from this saving ministry, for, while they could not be saved from death, they could be delivered from a painful and lingering one.

As the response of God and those who walk with Him will always be the outreach of saving love, there is only one course among those suggested above that the Lord or this father would follow. God is by nature a saviour. So too was the father pictured in this illustration. When God is frustrated from saving people in one area, He will still exercise His saving power in whatever possibilities remain. Thus, when the boy’s father found that his long pursued objectives of saving the youth from taking up weapons had failed, he still recognized that there was much he could do to save the boy from the worst effects of what he had chosen.

So, sadly, but with tender dignity the father drew his son aside and spoke with him. He expressed disappointment that the younger man had chosen to go the way he had, but assured him that he would respect his decision fully. He gently suggested that there were dangers associated with the use of such a weapon, from which perils he could only be safeguarded by receiving and obeying a number of specific precautions. The father intimated that he was more than willing to carefully instruct the son in these worst results of what he had chosen. 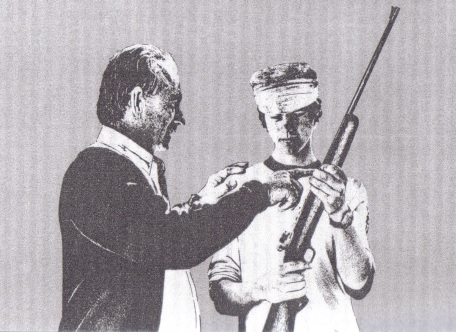 The son, relieved that his parent was not launching against him a fiery denunciation of his ways, no longer braced himself to resist such pressure. Instead he expressed his willingness to learn. By so doing he exhibited the strange quirk of human behaviour which gives men an unwillingness to obey God where the higher levels of faith are concerned, but permits them to follow His counsel at lesser levels. Israel, for instance, was not prepared to trust God fully by leaving the sword alone, but they accepted and followed His counsels regarding the restrictions designed to minimize its evils. In like manner, the son who had abandoned his father’s principles regarding the total rejection of firearms, was prepared to respect his counsels in the use of them.

The father introduced the training session by emphasizing that nothing he was about to do or say indicated that he had changed in any way, even though it could be interpreted that way.

God, who has been placed in the same position by the determination of His children to take up weapons of destruction, has likewise solemnly warned that His effort to save them from the worst effects of what they have chosen does not indicate any change in Him, even though His actions could and have been interpreted otherwise.

Despite the fact that men know that before sin entered God never destroyed, and despite these solemn declarations from God that no change has ever occurred in Him, men still look on His everlasting efforts to save and interpret them as being the actions of one who has become like man himself. The father in our story did not have to change his ways in order to instruct the son how to be a kind killer, neither did God have to change His ways to save Israel from being cruel users of the sword. Neither of them took life. They were only bent on saving it, or, if that were no longer possible, to save it from as much suffering as possible.

Now suppose that one of the villagers, the man who had most ardently sought to convert the father, had happened to come down the lane as this session was in progress. From a distance too great to hear all that has been said, he beheld the father instructing the son in the use of firearms.

What assumptions will this man make? What conclusions will he draw?

He never was possessed of the spirit of the father and therefore, could never understand it. Accordingly, there was no possibility of his correctly assessing what the father was doing. Instead, he would have interpreted what he saw as sure proof that the father had changed.

The onlooker would have lost no time in returning to his hunting companions to announce the father’s conversion. He would have told them that he was now one of them—a gunman. He would have offered as proof to his incredulous listeners, what he had seen of the father actually instructing the boy in gun-handling. The evidence he offered was factually true, for this is exactly what he had seen the father doing, but the conclusions drawn from those evidences were the opposite from the truth.

Even as that father was misjudged, so God has likewise been.”

Can you see the parallel between this story of the father dealing with his son and God having to deal with His people in light of the decisions they made? The father did not approve of his son acquiring a weapon and taking up the sport of hunting but he honored his mature son’s right to make that decision and worked with the son that he loved to do the best he could for him in the circumstances.

Likewise, God did not always approve of the decisions of His people but He always meets people where they are and works with them in any way they will allow Him; always seeking to save, to win them back to complete trust in Him.