(Part 14 of the Cleansing of the Sanctuary Series)

What was the very first, the original sin among humanity? Was it eating the fruit from the forbidden tree or was there a problem even before that? Consider again the three levels of sin (discussed in part 8) which did not exist in Adam and Eve when they were first created:

Before Genesis 3, they had not yet committed any sinful acts, they did not have sinful flesh as their creation was termed “very good” (Gen 1:31) and they did not have a sinful attitude. They certainly had no reason to distrust God. Enter the serpent who, scripture says, was “subtil” (Gen 3:1) or shrewd, crafty. To just tempt Eve with fruit that “was good for food” and “pleasant to the eyes” (Gen 3:6) would not have been a strong temptation as she was surrounded by all sorts of similarly-desirable fruit. She was certainly not lacking for food. 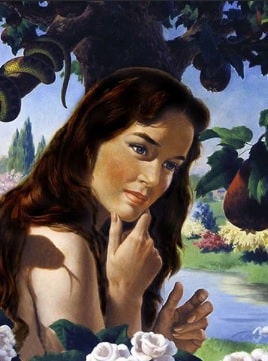 Satan got Eve’s attention by putting some questions contradicting God into her mind:

Then he made a direct attack on God’s character:

“For God doth know that in the day ye eat thereof, then your eyes shall be opened, and ye shall be as gods, knowing good and evil.” (Gen 3:5)

What could that have suggested about God?

Satan’s suggestions implied that God was withholding something desirable (“your eyes shall be opened”) from Adam and Eve and therefore was more concerned for His own interests than theirs and not to be trusted. Eve allowed the suggestion to register in her mind (her subconscious mind would readily accept it – part 13) affecting her understanding of God.

She perceived of God as being selfish and this immediately opened the way for a me-first, selfish attitude within her. We become like what we observe or, at least, our perception of what we observe. Her understanding of God was tainted by the lies of Satan and this lead her to distrust God and His character. Misconception of and resulting distrust of God’s character is the root of the problem. That point needs to be emphasized.

If everyone involved understood God’s character
they would trust and obey Him. Then all would happily do
His will, would welcome God working to bless us as He
wants to and all our problems would begin to fade away.

Correctly knowing God is the solution and the goal of cleansing the sanctuary.

The Sinful Flesh – The Brain Rewired

Eve’s distrust of God resulted (as discussed above) in an immediate, actual, physical rewiring in her mind – a seed of selfishness was planted. Christian psychiatrist and M.D. Timothy Jennings has a good description of what happened:

“Satan told lies about God. Adam and Eve believed those lies and the circle of love and trust was broken [sinful attitude]. Imagine you believe a lie that your spouse is having an affair, even though it isn’t true. If you believe the lie, does something in you change? When lies are believed, love and trust get broken and fear and selfishness result [sinful flesh]. This principle of fear and selfishness is commonly known as “survival-of-the-fittest.” This self-promoting principle, in turn, leads to destructive actions, what we call sins [sinful acts]. And destructive actions result in damage to mind, character, and body—a terminal condition.” (Timothy Jennings, www.comeandreason.com; my points added in brackets)

There is a fairly new term – neuroplasticity – which refers to the ability of the brain to change; really to rewire (form new circuits), according to many of the influences that it is subject to. We can see how quickly something can be implanted in our minds when we experience the startle response. There is an almost instantaneous release of fight or flight hormones. Even the hearing of bad news or believing a lie as described above for Adam and Eve can have immediate and profound effects.

Fear (discussed in part 13) and other emotions lead us to take self-preserving actions which, in many contexts, are not sinful. You want to move quickly if a car is coming at you in traffic. But when actions are taken at the expense of or harm to others – that is different. Fear of physical lack can lead to, for instance, stealing.

Sinful acts lead to a guilty conscious and a variety of negative feelings about ourselves which tend to cause fear and doubt and an even greater feeling of the need to preserve self.

This study takes the position that actual sinful acts are the least serious of the three levels of sin in the sense that they can never be eliminated from the life due to our sinful natures if the sinful nature is not first changed as explained above. It is just that the acts tend to be focused on because they are most obvious. Don’t worry – we will consider how to deal with even those in later parts of this series.

The result of that day in the garden was that Adam and Eve then felt a degree of distrust of God and, of course, there was guilt, shame, regret and fear. Their natures had been changed from one of other-centered, God-like love to one of self-preservation. Their brains had actually been rewired. Even their genetics had been changed (as we will explore in later parts of this study) and they could only pass down to their offspring their altered nature (genetics) which was now no longer “very good.”

God’s objective, since the fall, has always been to draw sinners back to Himself, to convince them of His continued, undiminished love for them. A reconciliation was needed but – it is important to note – the reconciliation only needed to be in one direction as is the case even today.

“For if, when we were enemies, we were reconciled to God by the death of his Son, much more, being reconciled, we shall be saved by his life.” (Rom 5:10)

“And, having made peace through the blood of his cross, by him to reconcile all things unto himself; by him, I say, whether they be things in earth, or things in heaven.” (Col 1:20)

Reconciliation between God and man is always spoken of as reconciliation of man to God, never of God to man. It is man that needs to change, not God Who does not change. (Mal 3:6).

Remember, Adam and Eve were hiding from God; they felt separated from and fearful of Him:

“… Adam and his wife hid themselves from the presence of the LORD God amongst the trees of the garden.” (Gen 3:8)

This was while He was “looking for” and seeking companionship with them:

God’s desire is for perfect reconciliation so that man can again be a sanctuary for the full indwelling of the Spirit of God. Some people have the understanding that God wants them to be overcomers and therefore focus, perhaps with great zeal, on cleaning up their behavior. However, as we saw above there are three areas that need to be dealt with and for cleansing to be effective they must be dealt with in the right order.

The sinful acts will be difficult or impossible to overcome while man has sinful flesh as that sinful flesh is always prompting him to act in sinful ways. And the sinful flesh (the wiring in the mind) cannot be remedied unless the fear circuits and other mental processes are dealt with and that can never happen without a change in the attitude towards God.

Here is a good illustration:

Sinful acts make the mess we, and others, see in our lives [the mess on the floor]. It is coming from the sinful flesh [the sink] which does not have the ability or capacity to keep from expressing its nature (spilling onto the floor) as a result of  the misconceptions of the character of God that we have allowed in and continue to believe [the running faucet].

We can attempt to mop up the floor (the sinful acts) but the job will never be finished. Or we can install a larger sink (increased ability to hold back the flood) to not express what is in our hearts. Obviously, the best option is to go upstream to the source of the problem and turn off the tap.

To try to clean up our lives while ignoring the source of the problem is about as frustrating as this:

The basis of our spiritual healing is a right understanding and acceptance of the true character of God. It is only the truth of what God is really like that will resolve the doubts that have been planted and passed down to us from the original lies Satan told (and has since added to) about God. The tap is still running.

The Order is Important

Failure to achieve results from just changing behavior can produce emotions that will tend to alienate us from God. If we do not have the right understanding of God’s character and therefore a wrong attitude towards Him, then our failures will just lead to feelings of condemnation and make us less likely to want to get to know Him. It makes us want to run and hide from Him just as it did to Adam and Eve. The difference between that and the more appropriate attitude could be illustrated like this (think of the attitude and level of trust of a teenage girl who has just gotten into big trouble):

This is Part 14 of the Cleansing of the Sanctuary Series

« A Being of Two Minds » Love as Motivation