Did Jesus Die the Second Death?

The Second Death is equated with the experience of the lost in the figurative Lake of Fire. That Second Death is experienced by all who have rejected salvation and is a death from which there will be no resurrection. It is commonly understood and stated that Jesus died so that we don’t have to. Of course, all die what is called the first death, the end of our physical lives on earth so such statements are referring to the Second Death which those who are saved will not experience. The important question then is: “Did Jesus die the Second Death?”

To answer that, let’s examine the characteristics of the Second Death as described for the lost and then assess whether those applied in Jesus’ case.

In the experience of the Second Death the lost:

We have identified the Second Death as primarily an experience of feeling utterly forsaken by God. Did Christ feel that? There is this verse describing His feelings of being forsaken by God during the crucifixion experience:

“And about the ninth hour Jesus cried with a loud voice, saying, Eli, Eli, lama sabachthani? that is to say, My God, my God, why hast thou forsaken me?” (Matt 27:46)

“But we see Jesus, who was made a little lower than the angels for the suffering of death, crowned with glory and honour; that he by the grace of God should taste death for every man.” (Heb 2:9)

This is often understood to mean He died the Second Death (coincident with His first death) so that we don’t have to. Let’s compare His death with the characteristics of the Second Death of the lost: 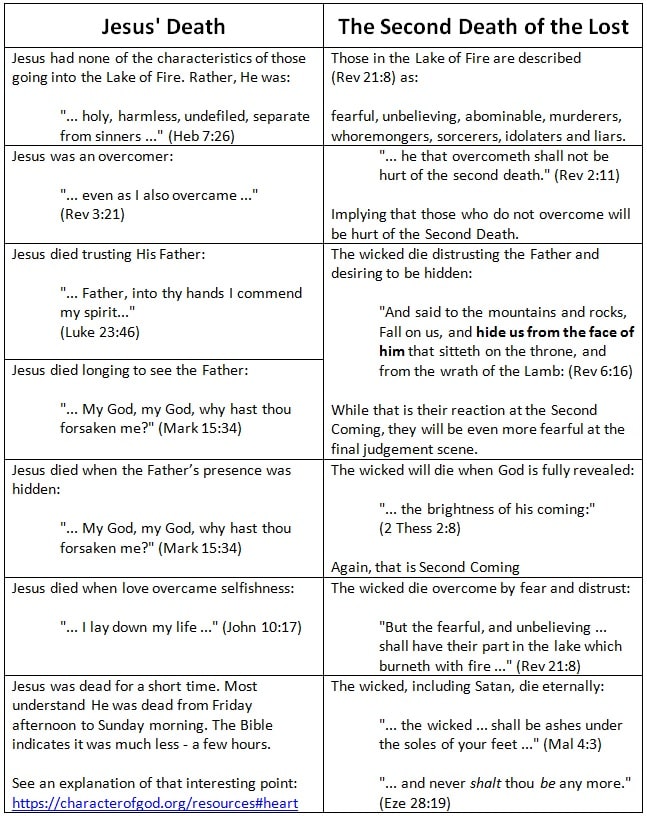 It can be seen that, in many ways, the deaths are different. It could be said that Jesus tasted that death (Heb 2:9, quoted above) only in the sense that He felt as the lost will feel before they die – the forsaken by God part. However, in spite of His feelings (“why hast thou forsaken me?” – Mark 15:34) He held on to the knowledge of His Father’s loving character and finally was able to say “… into thy hands I commend my spirit…” (Luke 23:46) which clearly indicates His trust in His Father. The lost, however, will feel forsaken by God because they have forsaken Him; they have chosen to not know Him and thus missed eternal life.

“And this is life eternal, that they might know thee the only true God, and Jesus Christ, whom thou hast sent.” (John 17:3)

However, some insist that Jesus must have died the Second Death because, in their minds, that is the penalty God requires of and imposes upon unrepentant sinners. Dr. Timothy Jennings provides a good explanation of why they do this and why it cannot be so:

“The desire to believe the idea that Jesus died the second death is so strong with some that not only is all the above evidence ignored, but fancy twists of logic are often employed to “justify” this idea. The argument is put forth that because Christ could not see through the tomb and because He emotionally and psychologically thought He was going to eternally die, then such mental anguish is the same as actually dying the second death. Just take a moment and think that through.

Suppose a death row inmate goes into the death chamber and is given a lethal injection. He feels the poison enter his veins and then loses consciousness, but in actuality an anesthesiologist put him to sleep.  Three days later he wakes him up.  Now, would we really say, “Well, he really died because he thought he was going to die and had no hope he would live again in three days?”

Such an argument has God playing “tricks” and “deceiving” His intelligent creatures into the idea that Christ somehow “died” eternally the “second death” because “He thought” He would never rise again. I challenge you to exam the evidence for yourself, weigh the issues, come to your own conclusion!” (Timothy Jennings, https://comeandreason.com/)

While scripture speaks of His feeling forsaken during the crucifixion, according to this commentary, when He did finally die He did not still feel that way:

“Amid the awful darkness, apparently* forsaken of God, Christ had drained the last dregs in the cup of human woe. In those dreadful hours He had relied upon the evidence of His Father’s acceptance heretofore given Him. He was acquainted with the character of His Father; He understood His justice, his mercy, and His great love. By faith He rested in Him whom it had ever been His joy to obey. And as in submission He committed Himself to God, the sense of the loss of His Father’s favor was withdrawn. By faith, Christ was victor.” (The Desire of Ages p756)
*”Apparently” refers to the understanding of those watching the scene.

That He finally died in an attitude of faith and commitment to His Father is very much supported by this verse:

“And when Jesus had cried with a loud voice, he said, Father, into thy hands I commend my spirit: and having said thus, he gave up the ghost.” (Luke 23:46)

Jesus mentioned both the First and Second Deaths when He said:

“And fear not them which kill the body [first death], but are not able to kill the soul [second death]: but rather fear him which is able to destroy both soul and body in hell.” (Matt 10:28)

Christ makes a distinction between two types of death. The first in which only the body is destroyed and the second in which the body and soul is destroyed by him who has the power of death, that is the devil. (Heb 2:14)

The word translated “soul” is the Greek word “psuche” which refers to the “mind, identity or individuality.”  After His resurrection, He showed Himself to and was recognized by His disciples as the same Jesus they had known before:

So, in summary, did Jesus die the Second Death? – the Biblical answer is “no.”

« What is the Second Death? » Righteousness definition