How Does the Mind/Heart Get Dirty?

(Part 9 of the Cleansing of the Sanctuary Series)

Temptation definition – the process whereby we are enticed to sin resulting in the mind being contaminated with its results.

As mentioned in part 8, we start life, we could say, with compromised hardware (our brains) but the software (the mind) has not yet committed what would commonly be called a sinful act. The Bible makes a distinction between physical and spiritual uncleanness:

“But those things which proceed out of the mouth come forth from the heart; and they defile the man. For out of the heart proceed evil thoughts, murders, adulteries, fornications, thefts, false witness, blasphemies: These are the things which defile a man: but to eat with unwashen hands defileth not a man.” (Matt 15:18-20)

Unwashed hands is mere external uncleanliness; it does not affect the internal character. The two can be confused:

“Howbeit there is not in every man that knowledge: for some with conscience of the idol unto this hour eat it as a thing offered unto an idol; and their conscience being weak is defiled.” (1 Cor 8:7)

Indeed the Pharisees, in Christ’s day, had this totally backwards:

“Woe unto you, scribes and Pharisees, hypocrites! for ye make clean the outside of the cup and of the platter, but within they are full of extortion and excess. … Even so ye also outwardly appear righteous unto men, but within ye are full of hypocrisy and iniquity.” (Matt 23:25,28)

We all know there is lots of dirt out there. Our world is filled with contaminants of both the spiritual and the physical varieties. We are not so concerned here with the variety of sources of contamination in the world. We can isolate ourselves to some degree from it but while we are living in this world there is no escaping some contact. The question here is how does it get in? How do our hearts become infected and then become sources of evil thoughts and all those things that defile a person; we could say from the inside out?

The Avenues of the Soul 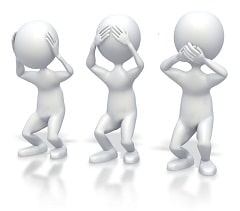 The primary input to our minds is via our senses:

Most everyone has heard what started as a Japanese proverb: “see no evil, hear no evil, speak no evil” although “speak no evil” refers to what comes out of the heart but, of course, it goes into someone else. Guarding against sin with emphasis on the senses has often been portrayed by that saying which corresponds to this verse:

“I will set no wicked thing before mine eyes: I hate the work of them that turn aside; it shall not cleave to me.” (Psa 101:3)

Everything we say and do has an effect so be careful what you expose yourself to and what you share with others.

A bit of humor once in a while doesn’t hurt and I am a gardener so: 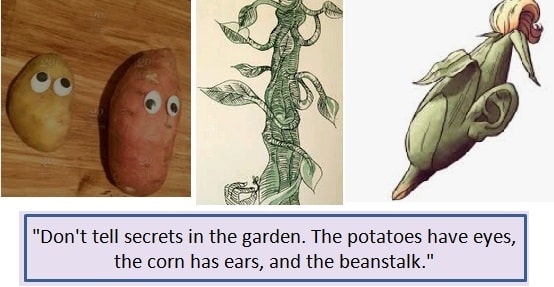 The senses are major sources of temptation to us and, if not properly managed, can result in many sins. Seeing something evil, in itself, is not a sin but it can easily trigger something within the human heart that leads to a sinful action.

The Mind in Control?

Having a thought is not sin. It is only when we dwell on questionable thoughts that they become, for example, lust. You have to train your mind (much like a muscle is trained to get stronger) to deal with those thoughts when they come to mind – rebuke them, replace them, choose not to dwell on them. By consistently taking action we will form an automatic habit of dealing with what could otherwise lead to sin. That could be averting the eyes from possible temptation:

If the eyes do not behold evil, the heart is less likely to covet. Isaiah describes a person who avoids exposure to evil:

“He that walketh righteously, and speaketh uprightly; he that despiseth the gain of oppressions, that shaketh his hands from holding of bribes, that stoppeth his ears from hearing of blood, and shutteth his eyes from seeing evil;” (Isa 33:15)

“He shall dwell on high: his place of defence shall be the munitions of rocks: bread shall be given him; his waters shall be sure.” (Isa 33:16)

Even more surprising are the questions in the verse before it:

That speaks to the need of guarding the senses.

In addition to external sources of temptation, our evil hearts produce their own temptations:

“For from within, out of the heart of men, proceed evil thoughts, adulteries, fornications, murders, Thefts, covetousness, wickedness, deceit, lasciviousness, an evil eye, blasphemy, pride, foolishness: All these evil things come from within, and defile the man.” (Mark 7:21-23)

So once the mind has become contaminated, evil thoughts can come into our conscious thinking because of memories of past events past without any present external input.

Not all “lust” is bad. The word “lust” in the verse above is from the Greek word “epithumia” (G1939]. Jesus used it in reference to Himself with the meaning of strong desire, in His case, for something good:

“And he said unto them, With desire [epithumia] I have desired to eat this passover with you before I suffer:” (Luke 22:15)

The “his own lust” James wrote of is the lust for evil things that man has cultivated within himself.

Let’s consider how this works:

What are the steps leading to sin or victory? Let’s try to understand this. Further references to these stages will be keyed with red numbers to the diagram above. We’ll use stealing as example.

1. a lust (desire) from within (in the subconscious mind) such as greed already exists due to many past factors.
2. a tempting circumstance such as an opportunity to steal and get away with it.
3. a reaction to the perceived opportunity such as “I want that.” If the trait exists in the subconscious and a tempting circumstance occurs it will automatically manifest as conscious thought – a desire for that particular item.
4. a struggle with the temptation in the conscious mind weighing the options of whether to act or not. This is where prayer for help or claiming scripture promises could (and should) come in.
5. a decision is made to act (steal) or not.
6. action is taken (sin) or not (victory).

The result at stage 6 will either reinforce the lust within (1) or tend to turn it down. This is related to the formation or breaking of habits which will be discussed later in this series.

In seeking to overcome at any stage it would be helpful to look to Jesus, our example who:

Especially was this true of his 40-day trial in the wilderness.

“Then was Jesus led up of the Spirit into the wilderness to be tempted of the devil.” (Matt 4:1)

This shows that it is not a sin to be tempted.

In Jesus’ case:
1. He had no sinful lust within His mind to prompt Him to sin.

“Hereafter I will not talk much with you: for the prince of this world cometh, and hath nothing in me.” (John 14:30)

There was nothing in Him, He had not previously fallen for any temptation, He had no stored selfish thoughts that could be activated by an external temptation. Yet He was exposed to temptation through the senses like anyone living on Planet Earth would have been. His heart was always pure whereas, because of our choices:

“The heart is deceitful above all things, and desperately wicked: who can know it?” (Jer 17:9)

2. We are always best to avoid tempting circumstances. However, it was within God’s plan that Jesus should be subjected to Satan’s temptations so that He could overcome them.

“Then was Jesus led up of the Spirit into the wilderness to be tempted of the devil.” (Matt 4:1)

3. One might say that there had to be something in Jesus that could react to temptation or it would not be temptation. As stated earlier, Jesus didn’t have that. Then how could He be tempted? It is possible to have a desire for something good that, if acted upon, leads to sin. Let’s look at each of His temptations and how He met them:

Lust of the Flesh Being genuinely hungry (a lust or desire of the flesh) is not sinful and Jesus had been fasting for 40 days. Since He was showing us the way to meet temptation – to rely on God – He could not use any means of escape not available to us.

1. He had a desire for what was offered
2. The opportunity was there
3. internally He may well have thought “that would taste good”
4. In weighing the pros and cons involved in following Satan’s suggestion He would have realized all the implications and effects on others of using His divine power. He cut off the process using scripture (“It is written …”).

Lust of the Eyes Jesus was sent to rescue the world from its captivity by Satan. Satan was offering Jesus something He desired (the kingdoms of the world or at least the people in those kingdoms) but it came at a price which included a direct sin:

“If thou therefore wilt worship me, all shall be thine.” (Luke 4:7)

Jesus would not do that and again used scripture to ward off the temptation:

“Thou shalt worship the Lord thy God, and him only shalt thou serve.” (Luke 4:8)

In His case, there was (non-sinful) lust or desire for legitimate wants/needs.

Pride of Life Casting Himself down from the pinnacle of the temple would have been a very public display meeting the expectation of many who believed that was how the Messiah would manifest Himself at the temple. Of course, He wanted the acceptance of the people but not because of their reaction to a display of power. Again, the temptation was met by quoting scripture.

4. Jesus met each temptation with “It is written …” which is a powerful lesson for us to do the same. His belief in and reliance on the Word of God then easily led to a choice against the temptation and to victory over Satan.

Clearly, it is important to use scripture in our defense. To assume we can, by sheer will power, make the right decision at stage 5 in every temptation would be folly. We have way too much of that “lust within” (1) and such a strong tendency to act in self-interest. However, there is hope if we can understand the cleansing process.

We also must remember that, on this earth, we will continue to be subject to temptation. That is why we must, in addition to being cleansed, be well able to use what we learn to cope with temptation – especially the promises of God.

The other thing that can help us is to reduce the lust within (1) so that there is less reaction (3) to the temptations (2). That process is the cleansing of the sanctuary which we will continue to investigate in this series.

This is Part 9 of the Cleansing of the Sanctuary Series

New Featured Content: The Cleansing of the Sanctuary, Dan 8:14

Light on the Dark Side of God

Receive updates from characterofGod.org
Your information is safe and will never be shared.