Isaiah 58:12 Repairer of the Breach

“And they that shall be of thee shall build the old waste places: thou shalt raise up the foundations of many generations; and thou shalt be called, The repairer of the breach, The restorer of paths to dwell in.” (Isaiah 58:12)

The meaning of the word “breach” as used in the Bible is examined here and an example, the breach of Uzzah here. What is the breach in the case of Isaiah 58:12? Many would understand it to be referring to the sins of man. This verse equates a breach with sin:

“Wherefore thus saith the Holy One of Israel, Because ye despise this word, and trust in oppression and perverseness, and stay thereon: Therefore this iniquity shall be to you as a breach ready to fall, swelling out in a high wall, whose breaking cometh suddenly at an instant.” (Isa 30:12-13)

Sin can certainly be understood to be a breach. Here is another thought:

“… and thou shalt be called the repairer of the breach, and the restorer of paths to dwell in; that is, the church and her builders, that shall be of her, shall be so called; the Jews and Gentiles will be converted in great numbers, and coalesce in the same Gospel church state, and so the breach between them will be repaired.” (Gill’s Exposition of the Entire Bible)

That is referring to the breach or divide between Jews and Gentiles. The quotations from Bible commentaries listed at the top of the breach definition page suggest that repairing the breach refers to fixing things God has done. And there is, of course, the popular option that it refers simply to a physical restoration as in the temple or wall of the city.

So we have a few possibilities for what it means to repair the breach:

But could the “repairer of the breach” be referring to a breach with a deeper meaning than any of those options?

Let’s identify the first occurrence of a breach in the history of mankind remembering that a breach can be understood as sin – a breach of the law of God – or as its results.

Many would identify the first sin of humanity as Eve’s eating of the forbidden fruit. She broke God’s express command – that could be classed as a breach. 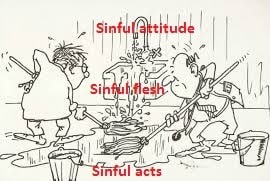 Let’s see where that fits in with this illustration used many times on this website. The sinful acts (the mess on the floor), as we apply it in this case, represent Eve eating the fruit.

But that only reflects what is happening in the sink representing the heart or mind with its thoughts and intents.

Something was already amiss in Eve’s thinking before she took that fateful bite:

“… the woman saw that the tree was good for food, and that it was pleasant to the eyes, and a tree to be desired to make one wise, …” (Gen 3:6a)

That corresponds directly to:

There was a perception in her mind. When she began to covet the fruit she was sinning in her heart and mind by coveting (Exodus 20:17) what was forbidden. It was that lustful desire that lead to the outward action. The sinful thoughts were outwardly expressed in the sinful action.

But let’s go back a step further. Satan told her a lie so she was deceived, yes, but she need not have believed that lie. In choosing to believe the lie over the words of God she was choosing to believe Satan rather than her Creator. She could only have done that if she had a distrust of God, a belief that He could be the one who was lying. So that attitude towards God, that He was not trustworthy was the beginning, the source of the problem. Believing Satan’s lies, she may have judged God to be at least lying and selfish by withholding knowledge from her. Eve judged His character and judged it to be faulty even though she had received nothing but benevolence from Him to that point.

Had she chosen to believe God’s words over Satan’s, had she not turned on the tap so to speak, her mind would not have gone to where it did and she would not have partaken of the fruit.

As far as mankind is concerned, we have just identified the origin of the breach in mankind’s relationship to God – a distrust of God. People will often talk about overcoming sin without realizing the source of the problem. The first thing to do is to regain our trust in God which is largely a matter of learning of His true character. (Turning off the tap of misinformation about His character.)

To expand on the illustration above, if people have a misinformed and wrong concept of God’s character and therefore distrust Him (even if subconsciously), they will have wrong thoughts which cannot but be expressed in the life and action. The greatest help in overcoming sin is to gain a right concept and true appreciation of His wonderful character. If the tap of wrong information about God’s character is not turned off, the resulting mess of sins on the floor will never be cleaned up. (To help you do that is the object of this website.)

The job of Christians is to show God’s true character. It could be with words but it needs to be backed up by a Christ-like life as evidence.

“And all things are of God, who hath reconciled us to himself by Jesus Christ, and hath given to us the ministry of reconciliation; To wit, that God was in Christ, reconciling the world unto himself, not imputing their trespasses unto them; and hath committed unto us the word of reconciliation. Now then we are ambassadors for Christ, as though God did beseech you by us: we pray you in Christ’s stead, be ye reconciled to God.” (2 Cor 5:18-20)

To us has been given a ministry, a part to play in reconciling sinners to the God Who loves them dearly by telling them of His true character and demonstrating it in our lives. Then we could be called a repairer of the breach between God and sinners.

“And they that shall be of thee shall build the old waste places: thou shalt raise up the foundations of many generations; and thou shalt be called, The repairer of the breach, The restorer of paths to dwell in.” (Isa 58:12)

In endeavoring to do that, we ourselves are inevitably awakened to a clearer realization of how good God is. What a great privilege to be able to be a part of repairing the breach!

Return from Repairer of the Breach to the Home Page

« The Breach of Uzzah » Curse – definition