Traditional Legal Model – Intercession is what Christ does for us by pleading with His Father to convince the Father to release us from our debt of sin on account of Christ and save us from our due punishment.

Biblical Healing Model – Christ, with His Father, works for our benefit by combating the forces of evil, restraining harmful forces of nature and convicting us of sin and our need for salvation.

From a Modern Dictionary:

The act of interceding; mediation; interposition between parties at variance, with a view to reconciliation; prayer or solicitation to one party in favor of another, sometimes against another.
Intercede (verb)

2. To mediate; to interpose; to make intercession; to act between parties with a view to reconcile those who differ or contend; usually followed by with.

1. A mediator; one who interposes between parties at variance, with a view to reconcile them; one who pleads in behalf of another.
(http://webstersdictionary1828.com)

“Likewise the Spirit also helpeth our infirmities: for we know not what we should pray for as we ought: but the Spirit itself maketh intercession for us with groanings which cannot be uttered.” (Rom 8:26)

“Wherefore he is able also to save them to the uttermost that come unto God by him, seeing he ever liveth to make intercession for them.” (Heb 7:25)

“For Christ is not entered into the holy places made with hands, which are the figures of the true; but into heaven itself, now to appear in the presence of God for us:” (Heb 9:24)

Note the three verses quoted include “for us,” “for them,” “for us.” Each one points to Jesus’ ongoing work in heaven as our intercessor, advocate or mediator to intercede (advocate, mediate) for us. The intercession for someone is to intercede for their benefit. To intercede with someone is generally understood as to speak to them in an attempt to have them change their position in regard to a situation or relationship with another person. There are three entities involved. The intercessor intercedes with someone for (the benefit of) someone else. 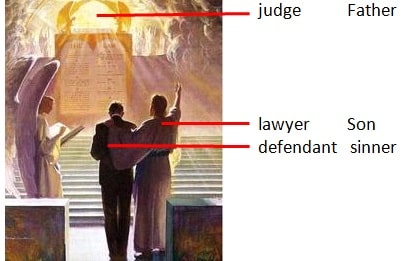 To intercede with someone is generally understood as to speak to them in an attempt to have them change their position in regard to a situation or relationship with another person.

Most commonly, it would be thought of like this:

It doesn’t have to be a court room scene. Mom could intercede with Dad to not go golfing with his buddies but to take their son fishing instead. Better to say interceding towards (rather than with) Dad (to whom the intercession is directed) on behalf of the son. Once in agreement, Dad might say to Mom: “Okay, I’m with you.”

God Does Not Need to be Convinced to Love Us

Is Jesus in heaven pleading with His Father to accept and save us? Does He have to convince His Father to go easy on us? What do the scriptures say about the Father’s attitude toward us sinners?

“At that day ye shall ask in my name: and I say not unto you, that I will pray the Father for you: For the Father himself loveth you, because ye have loved me, and have believed that I came out from God.” (John 16:26-27)

“What shall we then say to these things? If God be for us, who can be against us? He that spared not his own Son, but delivered him up for us all, how shall he not with him also freely give us all things?” (Rom 8:31-32)

The idea that the Son pleads to the Father is not stated in the Bible. The goal of intercession is to bring us to God; not to shield us from Him.

The Father is Also Interceding

Jesus is not pleading with the Father to convince Him to be gracious to us although this verse can sound like that:

“My little children, these things write I unto you, that ye sin not. And if any man sin, we have an advocate with the Father, Jesus Christ the righteous:” (1 John 2:1)

Note that (among other meanings) the word “with” can mean:

1. Accompanied by; accompanying
11. against, as in opposition or competition
(www.dictionary.com)

So, while “with” could indicate Jesus is trying to convince God to change His mind in regard to us, it could also mean that Jesus is working “with” (or alongside) the Father for our benefit, to get us to change, to lead us to reconciliation. Such a meaning would be consistent with:

“And he that searcheth the hearts knoweth what is the mind of the Spirit, because he maketh intercession for the saints according to the will of God.” (Rom 8:27)

“Who is he that condemneth? It is Christ that died, yea rather, that is risen again, who is even at the right hand of God, who also maketh intercession for us.” (Rom 8:34)

The Father also makes intercession for us. If the second “who” in Rom 8:34 is referring to the Son it still includes the Father by use of the word “also.” There is more than one involved.

Romans 8 says directly that God is interceding for us; it is God’s will. We need to remember that the object of intercession, the work of an advocate or mediator is to reconcile two parties, to bring them to a state of oneness (the original and correct meaning of atonement). It is also vital to remember that, in this case, the reconciliation is one-way:

“To wit, that God was in Christ, reconciling the world unto himself, not imputing their trespasses unto them; and hath committed unto us the word of reconciliation.” (2 Cor 5:19)

“For if, when we were enemies, we were reconciled to God by the death of his Son, much more, being reconciled, we shall be saved by his life.” (Rom 5:10)

It is us that need to be reconciled to God; never God to us. “The Bible nowhere mentions God’s being reconciled to man.” (SDA Bible Commentary Vol. 6, p528, 1956 edition)

In What Ways Does God Intercede for Us?

This intercession on our behalf, for our good, is accomplished on several levels:

1. Interceding for us by holding back the forces of evil:

“There hath no temptation taken you but such as is common to man: but God is faithful, who will not suffer you to be tempted above that ye are able; but will with the temptation also make a way to escape, that ye may be able to bear it.” (1 Cor 10:13)

2. Interceding for us by restraining and protecting us from the forces of nature:

“And after these things I saw four angels standing on the four corners of the earth, holding the four winds of the earth, that the wind should not blow on the earth, nor on the sea, nor on any tree.” (Rev 7:1)

3. Interceding for us by convicting us to change our ways:

“And when he [the Comforter] is come, he will reprove the world of sin, and of righteousness, and of judgment:” (John 16:8)

4. Interceding for us by drawing us to Himself:

See intercessor – definition for more detail and illustrations of the role of an intercessor.