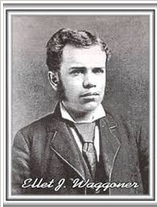 Ellet Joseph Waggoner (1855-1916) was a physician who was quite involved in the Advent movement of the late 1800s. In 1897, he gave a sermon with a particular emphasis on the character of God which helps to illustrate that this topic was certainly one of interest at the time. His main emphasis was that God Himself is, in a very real sense, on trial as scripture says:

He also stressed that those who are witnessing for God in His trial need to bear witness through rightly representing Him and His character. Waggoner said:

“Shall we continue to bear his name in vain? … Shall we not represent that name to the world?

While He did not get into details of the character of God, another speaker, George Fifield, at the same series of meetings, did go into considerable detail.

Here are some excellent quotations from Waggoner written while he was living in England and serving as editor of Present Truth magazine.

“’But,’ someone will say, ‘You have made the reconciliation all on the part of men; I have always been taught that the death of Christ reconciled God to man; that Christ died to satisfy God’s justice, and to appease Him.’ Well, we have left the matter of reconciliation just where the Scriptures have put it; and while they have much to say about the necessity for man to be reconciled to God, they never once hint of such a thing as the necessity for God to be reconciled to man. To intimate the necessity for such a thing is to bring a grave charge against the character of God. The idea has come into the Christian Church from the Papacy, which in turn brought it from Paganism, in which the only idea of God was of a being whose wrath must be appeased by a sacrifice.