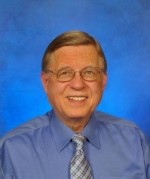 Information about me begins with the little church on a hill I attended with its wooden benches and the picturesque country church school with a bell tower and tall ceilings. This was in the mid-forties that my children refer to, as the olden days. This was a time we learned a lot about the do’s and the don’ts. It was a time we heard much about the Second Coming of Jesus and how He would appear.

My qualifications for writing books like this begins with the faithfulness of my mother in planting the spiritual seeds within me that later on began to grow. I say later, because it was in my early thirties before spiritual things became real to me. So in catching up, it was in the early AM one to two hours a day with my head in the Bible and other spiritual books. You won’t find educational degrees from well-known Universities of religion behind my name, but you will experience a logic that is hard to deny from a stance of common sense and reason, which just may have come from a higher source.

As time went on my interest grew when a friend gave me a set of cassette tapes done by a professor of religion that simply put me in a state of awe over the character of God. And as I continued receiving these tapes year after year my education went far beyond learned answers and cliches, to really understanding the WHY of this world.

My education within spiritual things came with a continuing interest in wanting to know how things work. Example: Don’t tell me we are saved by the blood of the Lamb without telling me what that means and how that works. Yes, and you probably guessed that in my early years I was the one that took the grandfather clock apart and put it back together with parts to spare. The point being, it’s my nature to want to know how things work. And I suppose this type of nature has helped me a great deal in developing a passion for spiritual things as well as my profession as a cabinetmaker, which I’ve enjoyed for more than forty years. Being a self-taught cabinetmaker, my eyes and ears have always been open to learn all I could about how all the different woodworking joints were done to best fit a certain project. Another thing that has helped me a great deal with both my work and spiritual things is that God has blessed me with a large dose of common sense.

The timing seems to be right for launching the ministry that I’ve been working towards for many years which is all about the kind of God we have, rather than about how we are saved. For if I understand correctly, God will save all that trust Him.

Ed’s website is www.timetothink.us where you can find contact information. Below is a recent video from Ed: