(Part 5 of the Cleansing of the Sanctuary Series)

Today, much of Christianity is looking for an earthly sanctuary or temple – not the Earth itself as in the days of William Miller (mentioned in part 4) but a building, a third temple to be built once again in Jerusalem. There are hints of this possibility in scripture. Paul wrote (~60 AD) that the man of sin would arise and set himself in God’s temple:

“Let no man deceive you by any means: for that day shall not come, except there come a falling away first, and that man of sin be revealed, the son of perdition; Who opposeth and exalteth himself above all that is called God, or that is worshipped; so that he as God sitteth in the temple of God, shewing himself that he is God.” (2 Thess 2:3-4)

There is no indication that this was fulfilled between the writing of Hebrews and the destruction of the Temple in Jerusalem in 70 AD. The man of sin is not going to heaven to do this. There must be another temple that is being referred to. Is there to be a rebuilt physical temple on Earth in the future sometime before the Second Coming? It seems so. This sounds also like Satan’s aspirations:

“For thou hast said in thine heart, I will ascend into heaven, I will exalt my throne above the stars of God: I will sit also upon the mount of the congregation, in the sides of the north:” (Isa 14:13)

This could be a reference to the table of showbread, sometimes understood as a throne and situated on the north side of the holy place in the sanctuary.

There is much speculation in spiritual circles of a future temple (referred to as the third temple) to be built in Jerusalem. The Bible hints of a temple structure to be built providing the stage for the deception mentioned in the passage quoted above to the Thessalonians. There are certainly plans and preparations for it spearheaded by The Temple Institute and supported by many earthly governments.

“The Temple Institute’s ultimate goal is to see Israel rebuild the Holy Temple on Mount Moriah in Jerusalem, in accord with the Biblical commandments.”

Israel has even produced coins to promote this process: 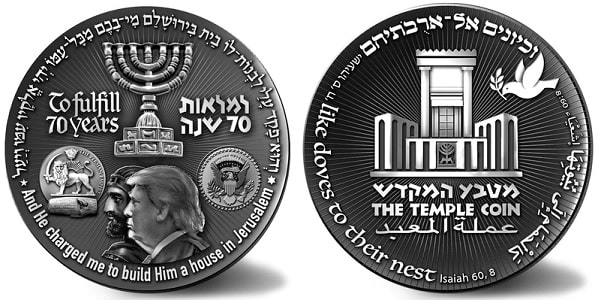 “The Trump Temple Coins are not just medallions or souvenirs. They are precious coins that have an entire story to tell. The main idea conveyed by these coins is that President Trump is initiating a prophetic process that will eventually facilitate, when the time comes, the rebuilding of the Third Temple. His actions mirror those of King Cyrus who declared to the Jewish people, in exile for 70 years, that ‘Hashem, The Lord of the World, charged me to build Him a house in Jerusalem.;” (http://www.israelnationalnews.com/News/News.aspx/259984)

The Earthly Sanctuary is Not the True One

Many people are looking eagerly for the construction of an earthly sanctuary to fulfill their understanding of Bible prophecy. However, scripture seems to be describing something more significant than a physical sanctuary on Earth. Paul wrote of a deceptive danger in a wrong understanding of the sanctuary as suggested above in the verses to the Thessalonians. He also penned this verse:

“A minister of the sanctuary, and of the true tabernacle, which the Lord pitched, and not man.” (Heb 8:2)

The suggestion is that there is a true tabernacle or sanctuary (present when Hebrews was written) and all others are either false or at least lesser and not the sanctuary heaven is most concerned about. It certainly rules out a rebuilt sanctuary on earth, built by humans. Take careful note that the true tabernacle is one pitched by the Lord. Here is a similar verse which sounds like it is speaking of that same true tabernacle and, again, not a man-made one.

“But Christ being come an high priest of good things to come, by a greater and more perfect tabernacle, not made with hands, that is to say, not of this building;” (Heb 9:11)

(That verse was discussed more in part 4.) So we need to look further for the true sanctuary, a tabernacle or temple that is not man-made and where Christ is ministering.

There is a dire need among Christians to know what constitutes the true temple of God so they can understand that other claims as to the identity of that temple or sanctuary are false. The passage in Thessalonians is very important for that. And so is the truth of the identity of the true sanctuary – the one of which Jesus is the minister, the one that is to be cleansed, and the one He wants to inhabit.

Naturally, Satan is going to do all he can to distract from the true cleansing of the true sanctuary even to the extent of seeing that there is the diversion of an earthly sanctuary reconstructed in Jerusalem – one that will be very visible and that everyone will be looking towards.

This is Part 5 of the Cleansing of the Sanctuary Series

« The Heavenly Sanctuary» The True Sanctuary