“For indeed the hand of the LORD was against them, to destroy them from among the host, until they were consumed (H8552).” (Deuteronomy 2:15)

The “them” referred to are those of Israel who died in the wilderness during the years of wandering.

This verse would seem to suggest some things inconsistent with the character of God. It seems to read that He was against His own people and He destroyed or killed them. If He is against us when we do wrong what hope do we have? Well let’s take a careful look at that verse. There are some significant issues we need to look at.

There is quite a bit to consider here so please follow carefully – it will be worth it. Note that definitions of important words are given on other webpages – look at them to get the full picture. Start with this page, go to each page as you come to its link, read it and return to where you left from. Here is a summary of the pages involved:

Here is the verse as it shows in e-Sword (www.e-sword.net):

Notice that there are no Strong’s numbers provided for “against them.” The words are derived from the Hebrew preposition:

The first letter (on the right – Hebrew reads from right to left) is “bet” meaning “in.” It is followed by a “mem” making it a plural, so it could be “in them” rather than “in him.” Here is an another example of its use:

“This is the water of Meribah; because the children of Israel strove with the LORD, and he was sanctified in them.” (Num 20:13)

Other translations in the KJV include “upon them,” “among them,” “with them,” “of them” and more. However, the translator’s understanding of the meaning will be influenced by the perceived meaning of associated words (the context) and, in this case, there was another word understood as “destroy.” If God’s intent was to destroy them, then “against them” would certainly fit.

For a correct understanding of the Biblical meaning of the underlying Hebrew word for “destroy” in Deuteronomy 2:15 see the glossary definition for discomfited. You will see that there are issues with that translation.

If you have read that page you have seen that the reaction of those discomfited was often associated with the terms arrows, hornets, pricks and smiting all of which can be linked Biblically to a call to the guilty conscience.

We can see that if the word translated as “destroy” in Deuteronomy 2:15 had been more properly translated as “discomfit,” the translators may have been more likely to use “in them” rather than “against them” earlier in that verse. God was working in them, in their minds, pricking their consciences with calls to repent.

From the definition of “consumed,” we can see that it does not mean to kill in Deuteronomy 2:15. It was a reference to the completion of the period of 40 years during which those men had their consciences tested.

Basically, it was 38 years after their rebellion at Kadesh plus (as we might term it) their time served – the 2 years they had already spent in the wilderness. It was a time of testing to reflect on their rebellion and its results and give opportunity for them to repent and receive forgiveness. There is no record that any repented but that is a possibility – God would not cut off that possibility.

By carefully examining the Biblical definitions of words through looking at the context in which the Bible itself uses them we have uncovered the true meaning. Here is the correction of Deuteronomy 2:15 step-by-step with the change, in each case, in red: 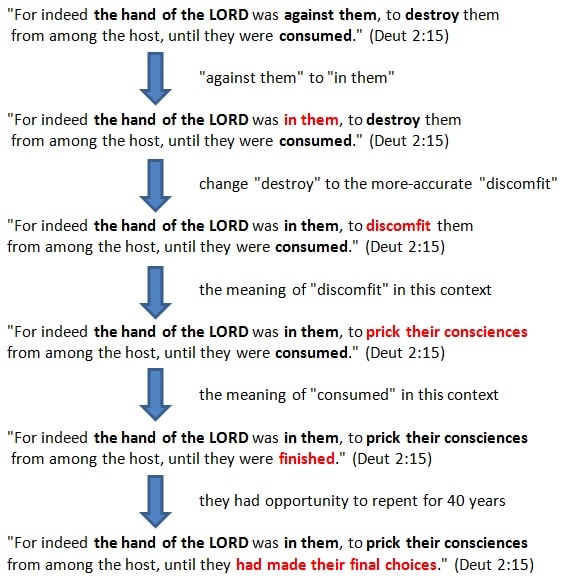 The phrase “from among the host” is simply designating that group from the rest of Israel. Of course, the first step would seem incorrect to a person who understands “destroy” and “consumed” according to their common meaning. However, multiple translation issues make it difficult to discern the overall meaning of this verse. It is apparent from the number of changes that every word needs to be considered and correctly understood.

Could the hornets, arrows, lightning, pricks and smiting all be calls to the conscience in attempts to get them to change course and make peace with God? That would seem consistent with an ever-merciful God.

There is an adage “There are no atheists in foxholes.” Not all agree with that. There are some so turned off the idea of God because of their wrong understanding of Him that they would not turn to Him even in that situation. However, there are likely no cases of God not giving a last-minute appeal to the conscience of a person facing imminent death. Then Deuteronomy 2:15 would be describing God’s appeals to the conscience as long as there was any hope of repentance.